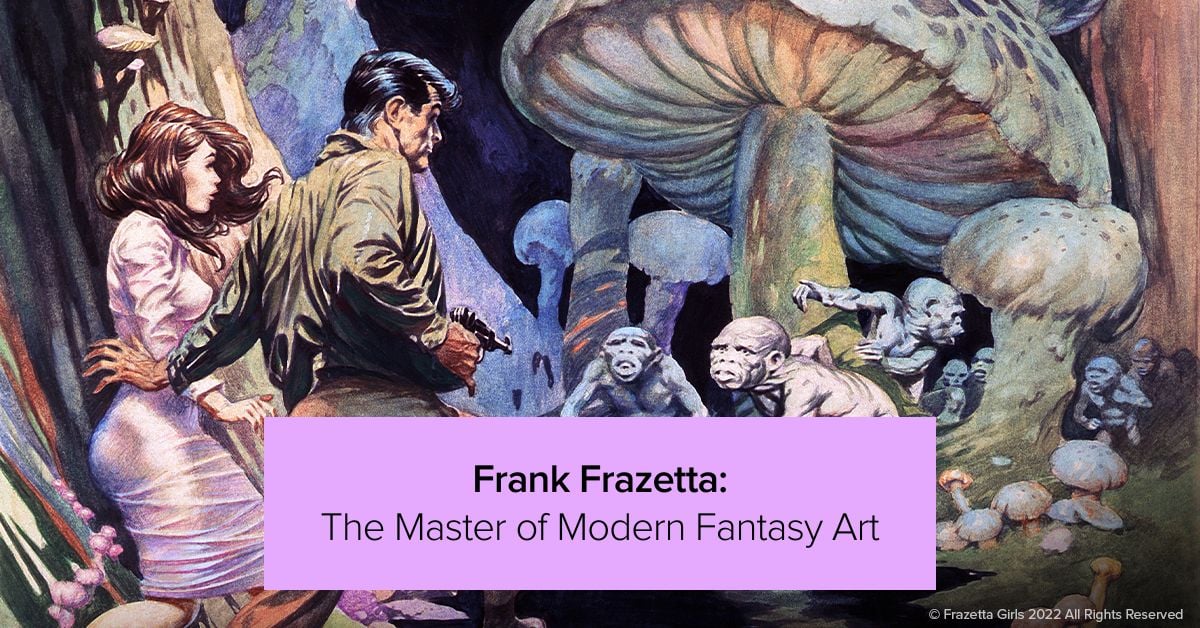 Frank Frazetta. To anyone with even a passing interest in fantasy art, those two words are enough to conjure some of the most iconic images in the genre: Conan swinging his sword against a backdrop of flames, Tarzan carrying Jane through the jungle, Death Dealer riding into battle… the list goes on. Often credited with single-handedly revitalizing heroic fantasy art (the entire sword-and-sorcery genre is arguably directly descended from his paintings), Frazetta was, quite simply, the master of his craft. Come along with us as we explore the life and legacy of this extraordinary talent and learn why he’s still considered a legend today.

Early Years and Career in Comics

Frank Frazetta was born into a Sicilian family in Brooklyn, New York, in 1928. A child prodigy, he started drawing practically as soon as he could hold a pencil. At the tender age of eight, his parents enrolled him in the Brooklyn Academy of Fine Arts, his first (and only) art class. As a sixteen-year-old, he broke into commercial art, doing fill-in work on comic books and even publishing his own strip called Snowman. This was the beginning of an illustrious career in the industry that would span over two decades.

During this time, the young artist would try his hand at everything from westerns to humor to crime stories. His landmark Buck Roger covers for Famous Funnies, along with art contributions to EC Comics, caught the attention of none other than Al Capp, who offered him a job on his uber-popular strip, Li’l Abner. Frazetta later worked on a solo creation Johnny Comet and helped out on Flash Gordon, among his other credits. He also created Little Annie Fanny for Playboy magazine, a stint that helped him support his growing family when comic books hit a rough patch in the late 1950s.

From Comic Strips to Pulp Heroes

In the 1960s, Frazetta’s career turned into new and uncharted territory, ultimately securing his place in history as the greatest fantasy artist of all time. It was during this period that he left comics behind and started pouring his creative energy into pulp book covers, a medium he would go on to develop into his distinctly iconic style.

Notable examples include his work on the Edgar Rice Burroughs titles (Tarzan, John Carter of Mars, Pellucidar, and others) and his interpretation of Robert E. Howard’s Conan the Barbarian. His paintings were characterized by an unrivaled sense of dynamism and energy, as well as a knack for depicting the human form in all its sensuality and strength. From the beginning, they stood out from all the rest to the point where readers frequently bought the novels for the covers alone! No wonder the paperback publishers vied for his services, often finding books to match his art (and not the other way around).

In the meantime, a 1964 caricature of Ringo Starr for Mad Magazine earned Frazetta his first Hollywood gig, the movie poster for What’s New Pussycat? by Woody Allen. More poster commissions followed, including ones for After the Fox (1966), The Fearless Vampire Killers (1967), The Night They Raided Minsky’s (1968), and The Gauntlet (1977).

At roughly the same time, Frazetta’s career as a cartoonist came full circle when he joined his former EC colleagues at Warren Publications and did a string of memorable covers for Creepy, Eerie, and Vampirella, cementing his reputation as the preeminent artist in the field.

By the 1980s, Frazetta’s style permeated every corner of pop culture, with a legion of imitators but no true rivals. His cover art had already gained a cult following, bringing a generation of readers into the SF/fantasy fold and redefining the look of the genre as we know it. Blockbuster movie posters only added to his legend, as did album covers for Molly Hatchet, Nazareth, and Herman’s Hermits, to name a few. But what was it that made his art so special, you might ask? And how did he manage to create such an enduring legacy?

Frazetta’s images are easily recognizable for their use of dark and moody colors, compositional mastery, and an overall sense of action and movement. His characters are almost always larger than life, whether it’s the heroic barbarian warrior, the voluptuous damsel in distress, or the man-eating demon about to devour its prey. These archetypal figures are often placed in dramatic settings, such as desolate wastelands, dark forests, or raging seas, where anything is possible, and danger lurks around every corner.

Frazetta’s color palette, a far cry from the garish hues favored by many pulp artists of the time, helps ground his fantastic imagery in gritty realism, making it all the more believable (and, thus, all the more appealing) to the audience. The sure sense of composition, yet another mark of his genius, invariably directs the eye to the center of the action—and what an action it usually is!

Menacing warriors engaged in hand-to-hand combat with monstrous foes, luscious heroines struggling to free themselves from the clutches of evil, mythical beasts battling each other to the death… These scenes have come to define Frazetta’s oeuvre and continue to captivate viewers today.

At the same time, the master’s uncanny ability to capture gestures and facial expressions mid-movement lends his art a sense of urgency that is impossible to look away from. Like a stopped piece of film, each of his paintings seems to depict a moment of intense drama, as if the characters are about to leap off the canvas and into our world.

But Frazetta’s biggest accomplishment is perhaps bridging the gap between high art and commercialism. Looking at his Seven Romans, you can see he was dubbed the “Rembrandt of barbarians” for a good reason. His work has a classical painterly quality, yet there is also a pulpy, action-packed sensibility that makes it immediately accessible and exciting. It’s the perfect blend of artistry and entertainment—which may just be the secret to its enduring appeal.

The Legend and His Legacy

Frank Frazetta passed away in 2010 at the age of 82, but not before asserting his position as one of the greatest artists of the 20th century. Throughout his career, he received numerous accolades from his peers, including being inducted into the Will Eisner Comic Book Hall of Fame in 1995, the Society of Illustrators Hall of Fame in 1998, and the Jack Kirby Hall of Fame in 1999.

Coveted by collectors and casual admirers alike, his first sketches were placed on the market in the early 1970s and sold for 35 dollars. Since then, prices for Frazetta originals have continuously gone up. In 2019, his Egyptian Queen, which inspired the famous Princess Leia slave costume from Star Wars, fetched a record-breaking 5,4 million dollars at Heritage Auctions Chicago.

The previous record, also held by a Frazetta piece, was set only a year earlier when another one of his paintings, Death Dealer VI, went under the hammer. Conan and Tarzan aside, Frazetta’s ominous original character has become his most iconic oeuvre, appearing in comics, novels, and even as a lifesize metal statue. No wonder he brought in a price of 1,79 million dollars, beating Superman and Batman in the process. And all that without as much as lifting his axe!

Frazetta’s family has continued to preserve his legacy through the Frazetta Art Museum, housing the largest collection of his work worldwide. The artist’s daughter and granddaughter have also launched Frazetta Girls, a company selling official Frank Frazetta merchandise. We at Displate have teamed up with Frazetta Girls to create a range of metal posters featuring his most iconic artworks, so be sure to check those out if you’re a fan!

Frank Frazetta may not have written the fantasy tales that kicked off the sword-and-sorcery genre, but his epic illustrations did more than anything else to bring those stories to life. In the process, he redefined what fantasy art could be and left an indelible mark on generations of artists. His work has inspired everyone from filmmakers to comic artists to game designers and continues to be a source of fascination and excitement today.

If you’re a fantasy fan, you don’t need an excuse to feast your eyes on Frazetta’s artwork. But if you’re unfamiliar with his creations, we hope this article has inspired you to check out some of his incredible art. At Displate, we’re proud to offer a range of his paintings on metal posters. So why not add one of these iconic images to your collection today?

It is rare for an artist to define an entire genre, but Frank Frazetta defied the odds. Did you enjoy learning about his life and work? What is your favorite Frazetta painting? Let us know in the comments below! And if you haven’t already, be sure to follow @frazettagirls on Instagram for more of his art!