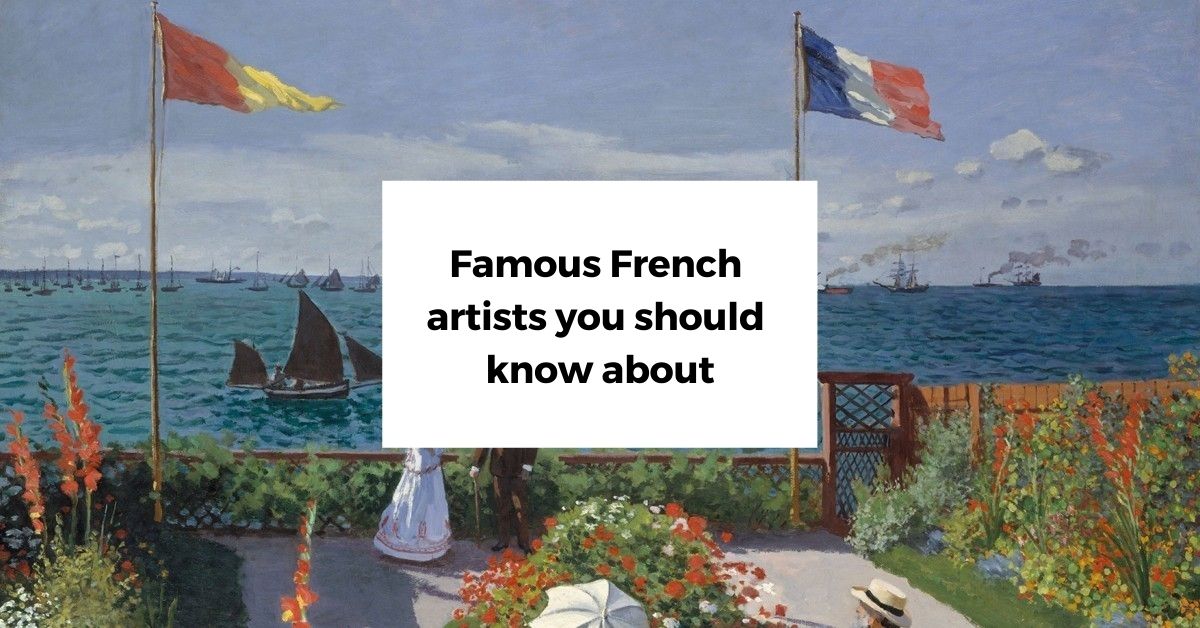 Aside from fine wines and gourmet food, France has been a cradle for the fine arts, with famous French artists such as Degas, Monet, Renoir and Matisse leaving a lasting imprint on the world of art and beyond. But even before the modern era, French painters, sculptors, and architects flourished under royal and aristocratic patronage gracing the world with many masterpieces that are part of art history still talked about to this day.

So, who are some of the most distinguished French masters and how have they come to rank as household names?

Here’s our list of 10 best known French artists along with their famous paintings that secured their place in the history of art.

The father of the Impressionist movement and arguably one of the most famous French artists of all time, Claude Monet would not have become an artist if it was not for his mother. Born to a rather wealthy ship chandler, Claude Monet was meant to take over the family business. Thanks to overwhelming support from his mother, however, he joined the La Havre school of arts and started studying painting.

Although unsuccessful at first, after being introduced to plein air painting by Eugène Boudin he undertook an ambitious landscaping project in order to document the ins and outs of French countryside. His Impression, Sunrise, which came to be around that time, gave birth to a whole new art movement with its name Impressionism derived from the painting itself.

Born to an upper-class family rich in both material wealth and political influence, Édouard Manet had a bright and comfortable future ahead of him. His parents wanted him to pursue a career in law, but Édouard Manet had other plans. Encouraged by his uncle, he started studying painting under Thomas Couture. After travelling around the world, or at least the parts known for their spectacular art, Édouard Manet opened his own studio and started his series of realistic paintings, including his two most recognizable masterpieces: The Luncheon on the Grass and Olympia.

Édouard Manet’s unique style consisted of rough brushwork which lacked the traditional details and transitional tones characteristic of the prevalent realism of his time. His work was considered hugely controversial, and served as the foundation upon which Impressionism was established. Nowadays, Édouard Manet is universally regarded as the father of Modernism, a pioneer who was not afraid to take risks not in order to charm the public, but for pure aesthetic pleasure. His record-breaking Spring painting is a great exemplification of those ideas.

Henri Matisse is often considered as one of the two most prominent and influential artists (the other one being none other but Pablo Picasso) of the 20th century. Despite the fact that he achieved resounding success in other walks of art, such as draughtsmanship and sculpture, he is primarily known for his unique style called intense colorism. He pioneered flattening and simplification of forms, at the same time experimenting with highly decorative, rigorous patterns adorning his work.

After cancer left him bed-ridden, painting and sculpting became nigh impossible. Unable to express himself like he used to, Henri Matisse turned to a new medium – cut out paper collage. By arranging shapes cut out of large sheets of paper prepared by his apprentices and assistants, he was able to create vibrant works on the border of painting and sculpture. Expanding on this idea, Matisse’s art began to fill entire walls or even rooms, unbound by traditional medium limitations. Examples of such works are the famed Oceania, the Sky and Oceania, the Sea.

Coming from the revolutionary turbulence of 1848 in Europe, Paul Gaugin’s work was bound to be as revolutionary as the times he was born in. Completely unappreciated and rejected by his peers, he was perhaps too avant-garde for their taste. Now, he is widely recognized as one of the forefathers of experimental use of color inherent to synthetist style which later inspired names like Pablo Picasso and Henri Matisse.

Gaugin’s unique style developed over the years, influenced by his travels to exotic parts of the world such as Tahiti and Martinique. He is known for using analogous colours in close proximity, creating beautiful, albeit seemingly muted paintings. The way he painted his characters bears resemblance to Japanese wood prints, taking on their naivety and rough form.

Best known for his depictions of night life in 19th century Paris, Henri de Toulouse-Lautrec was a prolific illustrator, painter, and caricaturist closely associated with the Post-Impressionist period. Noble-born, he was troubled with lacking health ever since he was a young boy. This prevented him from joining regular activities of his peers, and subsequently allowed him to immerse himself into the world of art.

Henri de Toulouse-Lautrec was a master of showing people in their natural work environment, mainly from the walks of life usually omitted by great artists of the time: prostitutes and other members of Parisian nightlife. An expert of crowd scenes, able to depict dozens of people, each highly individualized, he was uniquely suited for showing the movement and gaudiness which fascinated him greatly. An example of such work is the famed Marcelle Lender Dancing the Bolero in Chilperic.

Often dubbed the bridge between Impressionism and Cubism, Paul Cézanne’s work is immediately recognizable to any art enthusiast through his revolutionary style of painting. Despite being thoroughly fascinated by the young Impressionists of his time, he was unable to form a bond with them, appearing seemingly crass, rude, and depressed. Instead, he made a connection through the means of his work, single-handedly inventing Expressionism and moving the world of art into a brand new age.

Despite being often ridiculed and rejected by contemporary critics, Paul Cézanne is regarded as one of the great artists who had a profound influence on future generations of painters. He was able to give solid but malleable form to nature itself. Picasso often called Paul Cézanne his one and only master, knowing full well that without Cézanne’s works, modern art would not be quite the same.

One of the most inventive and productive artists of all time, Pierre-Auguste Renoir was one of the voices that gave birth and further influenced the Impressionist movement. Known primarily for his observance of female beauty and sensuality, he was a master of showing people in private situations, creating vibrant images through his commanding use of light and color.

His experiments into the structure of the shadow alongside Claude Monet marked the first stage of Renoir’s style, often lauded for his brilliant and delicate blending of characters into their surroundings. He moved onto typically Impressionist landscapes, culminating in his perhaps most famous piece of art, the Bal du moulin de la Galette.

Shying away from the traditional approach of imitating Greek sculpture, Auguste Rodin is perhaps the most famous French sculptor, often called the father of modern sculpture. Born in a working class family, Rodin was mostly self-educated, taking on a meticulous and diligent approach to his work. Instead of focusing on realistic details, Auguste Rodin tried to recreate the emotional state of his subjects by utilizing texture to create a sense of incompleteness.

Rodin’s sculptures emphasized the play of light and shadow, and how it reflected on the substance of the individual. When trying to show a man in the process of thinking, he worked arduously to make each and every part of his body convey the strain the act of reflection bears on one’s body. This famous French artist often made his models walk around freely around his studio, sketching individual body parts in order to make snapshots of muscles in movement.

Another famous French Impressionist, Edgar Degas, was intimately involved in the early days of the movement. Coming from a wealthy banker family, he was free to pursue the career of his choice – that of a historic scene painter. Well-educated in that regard, he went on to develop his own unique style and depict his modern life in a classical manner. However, unlike his contemporaries, Degas was so infatuated by the art of dance that he made it the most prevalent theme of his paintings and sculptures.

Later on in life, he tried to distance himself from Impressionism, often being its harshest critic and detractor. Edgar Degas wanted to present himself as a realist with as little spontaneity in his artwork as possible. When questioned, he himself said that “In art, nothing should look like chance, not even movement”. This gives a good idea of the meticulousness and diligence that he invested in his art-making process. A good example of this would be A Cotton Office in New Orleans, which he painted during his visit there in 1873.

Born as Charles-Édouard Jeanneret in Switzerland, this famous French artist is a rather controversial figure. This highly influential architect and city planner aimed to blend together utilitarianism and expressionism in a harmonious vision of living space for scores of people. The harshness of his childhood surroundings had a profound impact on his later artistic choices. In order to satisfy his yearning for asceticism, he took to using rough-cast concrete, a material that was never utilised this way before.

Commissioned to design and oversee the creation of dozens of ambitious projects around the world, he worked tirelessly to alleviate some of the ails of modern cities. Despite these elevated principles, Le Corbusier is not without a degree of controversy. His critics often point out his indifference to local cultural sites, and his ties to fascism and antisemitism. Nevertheless, this famous French artist is undoubtedly one of the most influential architects that ever lived.

Famous French artists that appear on our list may belong to different historical eras and represent various artistic styles, but they all left behind a legacy that continues to influence artists today.

Are your walls in need of a makeover? Check out our amazing choice of fine art posters! Hang your favorite masterpiece on that empty wall and bring more art into your life!

Are there any other famous French artists you think we should include on our list? Let us know in the comments!