On the Spot: Luca Comoli 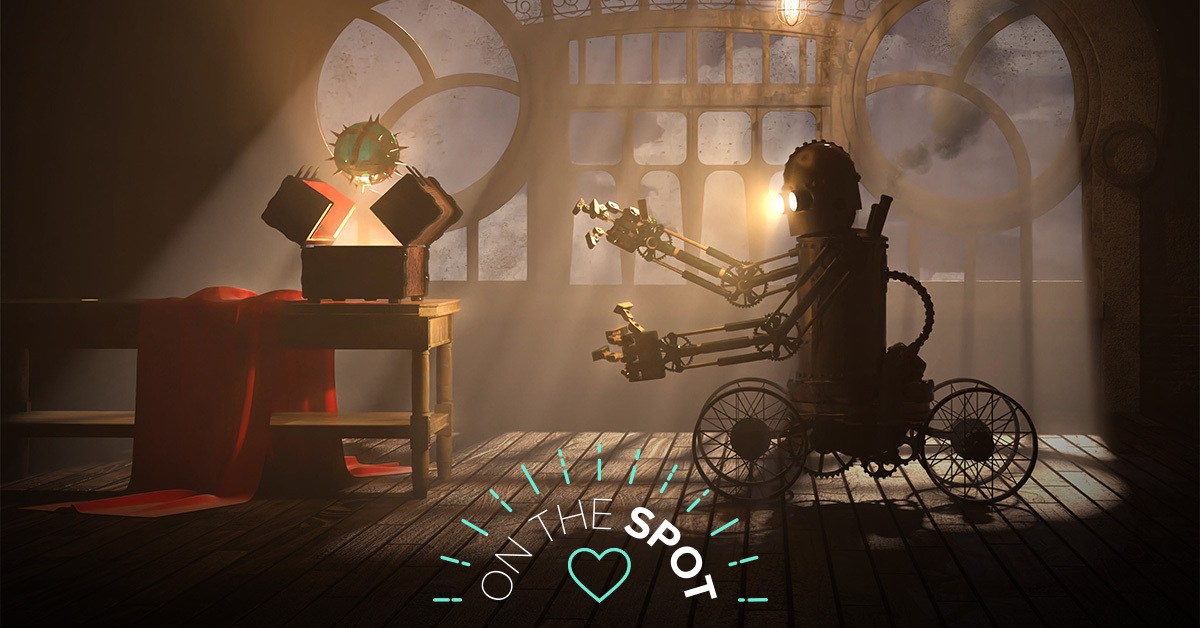 Some artists run on real world inspirations while others are fueled by their inner experiences. Luca Comoli is powered by steam. He creates these grim and dystopian steampunk landscapes that are as intriguing as they are intimidating.

In this week’s On The Spot, we talk with Luca to find out how he works, who helps him grow as an artist, and what the gigantic Clockwork Colossus has to do with all of that.

You’ve been drawing and painting since childhood. What were your first steps as an artist?

There was this comic magazine that launched a nationwide drawing contest, with a camera as first prize. My parents let me participate, and although I wasn’t really convinced I could do any good, I drew some astronauts on the moon doing a lot of disastrous things. Incredulously enough, I won that camera.

Then I entered yet another contest, this time regional, and won a collection of stamps. So what my early childhood had taught me is that drawing could get me a lot of absurd stuff that has absolutely nothing to do with drawing.

Where do you live and what does your workspace look like?

I live in the far north of Italy, in an old house located in a national park. It’s in the middle of the woods at the foot of the Alps. My workspace is filled with lots of different objects. I have shelves filled with old books and bizarrely-shaped bottles.

There are also drawings all over the place. Not all of them are mine – I have a 5 year old daughter who often sits by my side and draws. Then she explains to me what I should do to make my drawings as good as hers.

You describe yourself as ‘Steampunk addicted & Dieselpunk lover’. How does this passion influence your art?

It’s in every single one of my drawings. Every time I see something, I try to imagine its Victorian steampunk version. In my head, I apply this aesthetics even to things that don’t fit it at all.

I was born a steampunk addict and over the years Dieselpunk has gradually grown to be a big thing, too. I think the two actually go hand in hand, even though some purists may disagree.

Now I’m picturing the Victorian steampunk version of a pissed off purist in my head.

How would you describe your style?

Post-dystopian. The dystopia is central to my art, however it usually comes with a drop of light and hope. As if life was serious and harsh, but somehow we’re still making it anyway.

Which of your artworks is your favorite and why?

I live half of my life – the artistic half, that is – on a very distant planet, atop of an immense tower that, as far as known, contains the whole of humanity. Although hardly anyone is aware of this, a gigantic Clockwork Colossus is slowly approaching the tower. Who operates it? What are their motivations? Nobody knows.

I have imagined this Colossus for many, many years. The first drawing that portrays him is very special to me. As if I had finally met an old online friend in person.

Where do you take your inspiration from?

I have traveled all over the world for work and visited every continent and an enormous amount of countries. When you travel so much, the world starts to seem small at first. But then you begin to realize that it’s actually made up of infinite details: billions of people in countless houses with many windows, each of them hiding their own story and living their own life.

This is my inspiration: the fractal complexity of the immense mankind-organism. The hive cities. The energy of millions of invisible lives flowing together.

Are there any artists you look up to?

Certainly Fritz Lang and his Metropolis. But then who doesn’t?

What work do you most enjoy doing?

Post-production, when the games are over and the frenzy of childbirth subsided. I can spend hours adding final touches and embellishing, non-destructively. It’s relaxing and fulfilling.

What are your other passions?

Paragliding and woodcrafting. I have my own small artisan carpentry and it’s really well equipped, so I can craft many things, from lamps to kitchen tables. Wood and copper, when put together, are just so beautiful to look at and so pleasant to touch.

I almost forgot: I also build steampunk cities in Minecraft with my friends.

What’s the best piece of advice you’ve been given?

To study and draw over and over again, until you get the final result. Because even when you feel like you’re almost there, you’re not even halfway through.

I believe that so far, my drawings have been merely an ongoing study of a subject. One day, I will be able to finally draw it for real.

On The Spot: Riza Peker

On the Spot: Louise Goalby

On The Spot: Josh Kasper

On The Spot: Taku