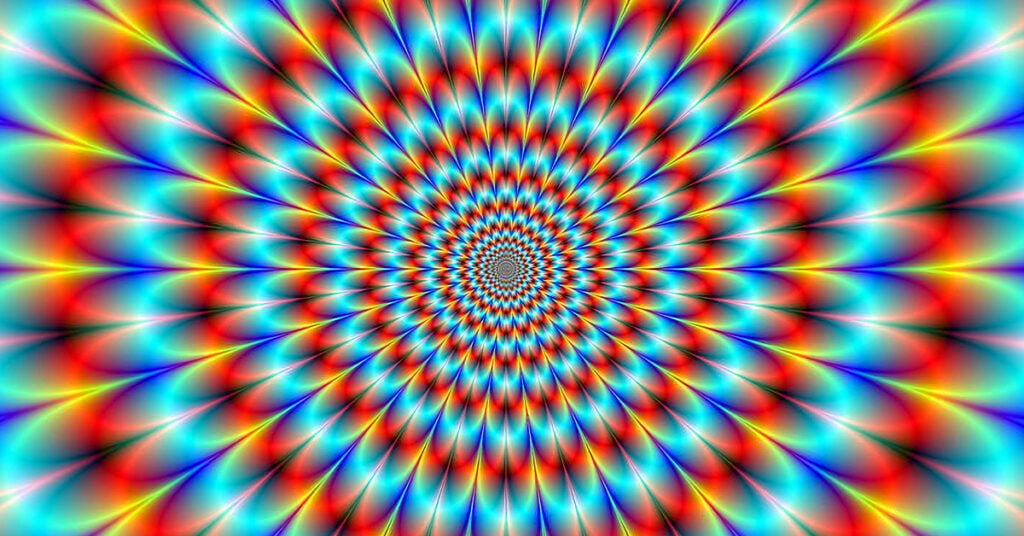 Optical illusion art, better known as Op art, is a form of abstract art that emerged in the 1960s. It utilizes graphic shapes and block colors to create the illusion of movement or depth, exploiting the intricate ways in which the human eye perceives what we see.

Ready for a journey into the eye-​bending world of Op art?

Take the plunge and leap head-first into the dizzying frenzy of swirls, stripes, checks, and spots straight from the mid-sixties. But be warned: the images you’re about to see are not for the faint-hearted!

We’ve put together a guide to answer some of the most common questions about optical illusion art. Discover who put the Op in Op art and why the style became one of the most recognizable forms of contemporary design today.

Our first encounter with an artwork is usually visual, but what we see is not always what we get. Certain illusions can fool our brain, tricking us into seeing things that are not there or keeping us from seeing things that are. Op artists have explored various ways to manipulate our perception with lines, curves, and zigzags, inevitably jangling the nerves and assaulting the eye of an unsuspecting viewer.

But how does optical illusion art work exactly?

Op art exists to fool the eye. Realistically, you know that the piece in front of you is flat, static, and two-dimensional. Your eye, however, begins sending your brain a message that what you see is actually dancing and weaving instead.

Op art relies on two specific techniques. In order for the illusion to work, Op art employs perspective and careful juxtaposition of color. The former makes an object look as if it was farther away, or closer, or larger, or smaller than it really is, while the latter helps trick your eye into seeing movement where there is none.

Op art is not meant to represent reality. Instead of having a particular subject matter or theme, it considers perception itself the medium that it works through. More than other works of art, op art creations are rather props, or aids, for viewers to make their own, unique experiences.

Op art offers more than one perspective, depending on your vantage point. It often requires that we move around when looking at it, quite literally showing us the limitations of human perception.

The History of Op Art

From shadowplay to distorting mirrors to magic lanterns, people were always fascinated by optical illusions and eye tricks. Artists too, played with the principles of perception, manipulating line, shape, pattern, and color to create illusion of perspective and depth well before the advent of Op art.

For example, in the two World Wars, painters were deployed to cloak military vessels in a jumble of angular black-and-white stripes to jam the senses of enemy submarines, a painting technique known as razzle dazzle.

However, it was only in the 1960s that the centuries-old fascination with optical illusion allied to new interests in technology and psychology, blossoming into an art movement that would define a generation.

Op art started to gain popularity in the late 1950s, but the term itself didn’t first appear until 1964. It was coined by Time Magazine and had become a household phrase by the following year with “The Responsive Eye,” a 1965 MoMA exhibition that triggered an international Op art boom.

The exhibition featured over a hundred artists, including the immediate father figures of Op art, who quite literally explored how the eye responds to color, pattern and light. They drew on methods developed by their predecessors, from Seurat and Monet to Mondrian and Malevich, to produce intense visual experiences that excited and confused the viewers.

Although art critics initially dismissed it as a gimmicky use of perceptual tricks, Op art became popular with the public, and quickly crossed over into popular culture, most notably fashion and advertising. From bold checks to geometric shapes, op motifs jumped off canvases and were splashed onto everything from dresses to wallpapers.

But the Op art craze had a sadly mercantile side to it. Applied to clothes, pottery, and carpets, the hypnotic creations of Op artists were indiscriminately consumed as decorative objects, which largely undermined their artistic value. Briget Riley, one of the leading figures of Op art, unsuccessfully tried to sue an American clothing company that used one of her paintings as a fabric design.

To many, Op art mirrored the counterculture of the time, epitomizing the interest in the alternative avenues of perception, just like the hallucinogenic drugs of the same period. It also seemed a perfect style for an age defined by the rapid march of science and technology.

As the Swinging Sixties faded, so did the influence of Op art. Today, its reputation continues to hang in the balance. While some critics still consider it an embarrassing blip on the art history radar, the style keeps resurfacing again and again, inspiring fashion designers and contemporary artists alike.

Most people credit the Hungarian-French artist Victor Vasarely with starting the Op art movement. Dubbed the grandfather of Op art, he was in his late sixties when the Op art craze began. With his pioneering geometric designs and hypnotising optical illusions dating back to the 1930s, he laid out the fundamentals of the movement 30 years before the Op art concept was conceived.

A tangle of black-and-white lines weaving and unweaving in front of the viewer, the Zebras painting is an example of an op-art work predating Op art.

In 1972, he was hired by Renault, the automobile manufacturer, to redesign the company’s logo. He kept the famous diamond shape, refreshing it with clean, angular lines. He also created the cover art for David Bowie’s album Space Oddity!

Who Are Famous Op Artists?

Let’s take a trip back to the 1960s and explore artists that were vital to the beginnings of Op art. Below are the three wizards of Op and some of their eye-popping artworks:

A leading figure in British contemporary painting, Riley is also one of the foremost proponents of Op art, rivalled only by Vasarely himself. Her interest in optical effects was a result of her study of Seurat’s technique of pointillism, but when she began to explore Op art she worked initially in black and white.

Born in Germany, Albers is best known for his work as an abstract painter and theorist. While his roots were grounded in the Bauhaus school of thought, his experiences in America led him to explore patterns and colors that are now the signature of optical art.

American born Polish painter, Anuszkiewicz was a pioneering practitioner of Op art before the Time Magazine coined the phrase “Op art”. He manipulated fundamental elements of art to make, as he put it, “something romantic out of a very, very mechanistic geometry.”

Op art was a short-lived movement yet its legacy is still very much alive, not only among collectors and curators, but among young artists as well, with several big names in current American art, including Jim Isermann, Gilbert Hsaio, Susie Rosmarin, and Xylor Jane, having adopted elements of Op as their own.

Are you a fan of op-art swirls and giddy lines? If so, be sure to check Displate’s hypnotizing collection of Op art posters. And if you’re interested in the 1960s design trends, you might enjoy our piece on 1960s’ retrofuturism.

Is there anything we have missed? Let us know in the comments below!

What is Vexel Art? Beautiful Examples of Vexel Art