Retrofuturism is a fascination with how the future has been viewed in the past, that is to say, what the people of yesterday imagined today would look like. While their assumptions ranged from laughably off-the-mark to eerily accurate, they were almost unequivocally optimistic, leaving us, contemporaries, achingly yearning for times that never were.

"Tom Swift and His Outpost in Space" via HiFiSi/Reddit

OK, let’s get this out of the way: what exactly is retrofuturism?

Retrofuturism is usually defined as a trend in the arts that revisits visions of the future as portrayed by the artists, writers and filmmakers of the past. It originates from the popular strain of futurism that flourished from the late nineteenth century through 1970s, and exploits the dissonances between the current and old representations of the future.

What Started the ’60s Futurism Trend?

Making predictions about the future is dicey at best and impossible at worst, but this has never stopped people from trying to do just that.

The 1960s was a time when these predictions were particularly bold, with everybody, artists and laymen alike, dreaming of colonies on the moon, jetpacks, and flying cars. In fact, this was the golden age of futurism brimming with unadulterated optimism and hope for what was to come.

Among the futuristic dreams of the time were bustling cities with multi-level streets, elevated sidewalks, and aerial bridges connecting lines of skyscrapers pointing to the skies teeming with airplanes, zeppelins and gyrocopters. The people of tomorrow would pop meal pills and live in fully mechanized homes with inflatable beds, glass domes, and robot housemaids.

The 1960s’ veneration of the future was rooted in the technological enthusiasm and unbridled utopianism prevalent in the American society ever since the late nineteenth century, a result of rapid technological advancement during the Second Industrial Revolution. Electrification, mass-production, and other innovations created a general air of expectation for inevitable progress that weathered the Great Depression of the 1930s and continued well into the postwar period.

In 1960s, the possibilities of growth and development in many areas – artistic, social, scientific –  seemed broader than ever. While in the midst of a cultural revolution, the Western world was also being transformed by significant technological advances, such as manned space travel, color television, and the advent of the internet. And it was against this backdrop of progressive social change and technological innovation that the near-utopian visions of tomorrow thrived.

While the futurists of the 1960s successfully predicted some inventions that once seemed inconceivable, such as driverless cars, wireless communications, or video calls, the majority of their forecasts fell staggeringly short of the mark.

The decades ahead were envisioned as magical and filled with space travel, airborne transportation, and robot assistants. In the 21st century, we were all supposed to be living in fabulous domed underwater cities, vacationing on Mars, and hosting the Olympics on the moon. Sadly, both space and ocean colonization still seem confined to science fiction, the flying car never got off the ground, and I bet there are plenty of sixty-somethings still awaiting that robot butler.

Remarkably, when the seers of years past gazed into their crystal balls, they would always paint a picture of a society dominated by technological but not social progress, with stereotypical roles of men and women intact. “Fingertip shopping will be one of the many home maker’s conveniences”, says the voice off camera. “What the wife selects on her console will be paid for by the husband at his counterpart console.”

The term retrofuturism was created in 1983 by Lloyd John Dunn, an experimental artist and publisher. With this clever coinage, Dunn managed to capture the seemingly contradictory combination of nostalgia (retro) and what was to come (futurism). For a period of time, he also published a magazine of the same title, “Retrofuturism”, which covered all sorts of related artistic and technological trends.

The retrofuturistic design was inspired by the advent of space exploration in the late 1950s and 1960s. For over half a century, our visual perception of the future was dominated by smooth curves, glossy plastics, and popping neon colors in the sets of Stanley Kubrick’s “2001: A Space Odyssey” (the cinematic epitome of the retrofuturistic aesthetic) and the TV series “The Jetsons”.

The retrofuturistic design drew from Art Deco, Streamline Moderne, and Populuxe or Googie architectural styles, which fused together to create what we now know as Raygun Gothic, a visual style leaning heavily on eye-jarring colors, geometric shapes, sweeping curves, and shiny metal and glass.

There’s another side of retrofuturism that deals not so much with the past imaginings of the future, but rather with the present musings on the past. Artists reinvent the past with technological advances from the future, creating a new past that never happened. The most notable example of this kind of retrofuturism is steampunk, a genre of speculative fiction set in the Victorian era in which steam, not electricity, drives technological change (hence the name).

Here’s a bunch of facts about steampunk you may not know about:

It appears that today there’s not much left of the visionary energy of the 1960s. In fact, retrofuturism’s appeal to us seems to rest on our disenchantment with the future. As we mourn the lost belief in progress, we’re looking to the rosy and somewhat naive dreams of the past, increasingly nostalgic for a time when we believed the future was closer than we thought.

Do you sometimes wonder what tomorrow will be like? If so, do you see the future as hopeful or bleak? Let us know in the comments!

PS If you like vintage style, you might want to check out the amazing retro posters you can find on Displate! 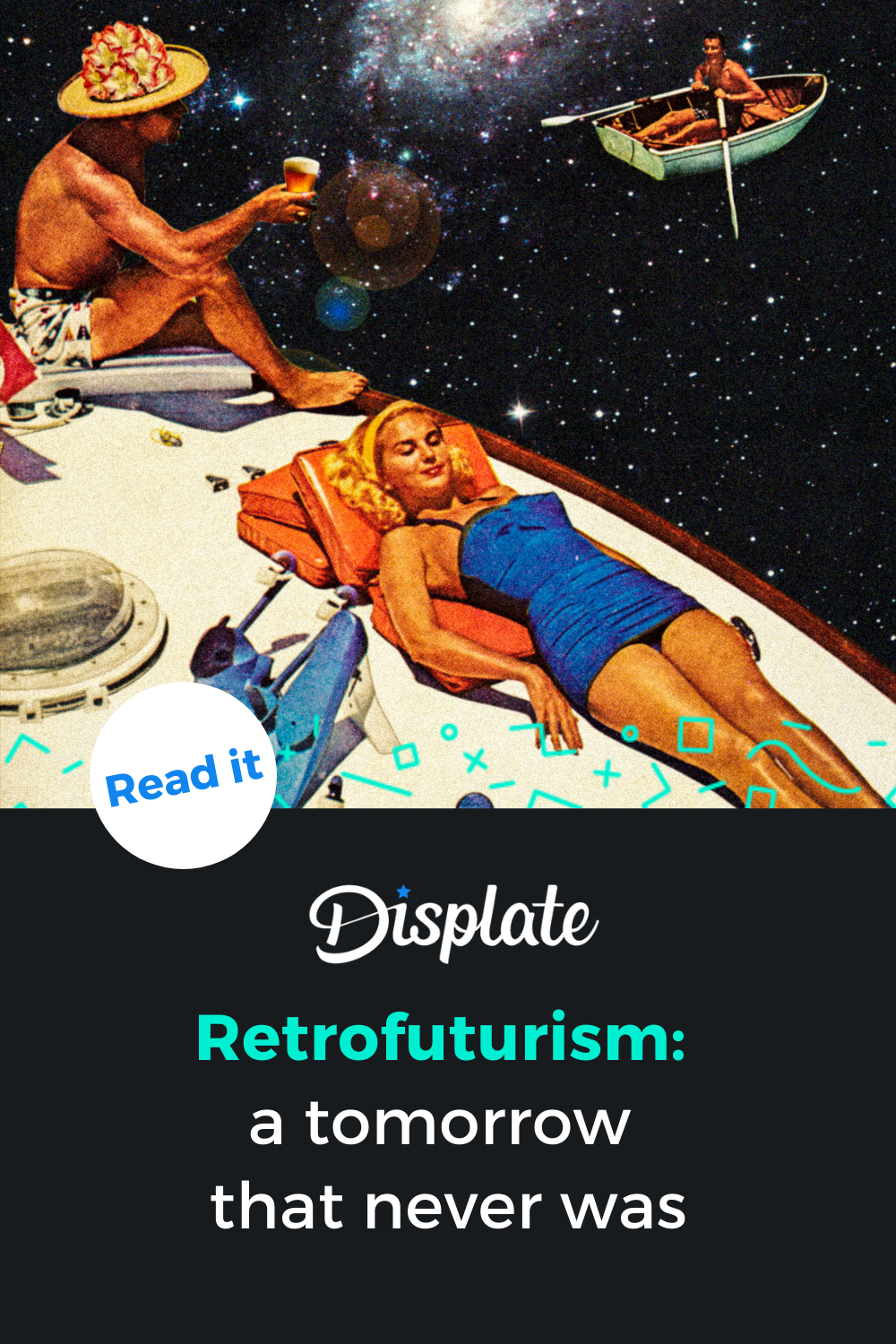