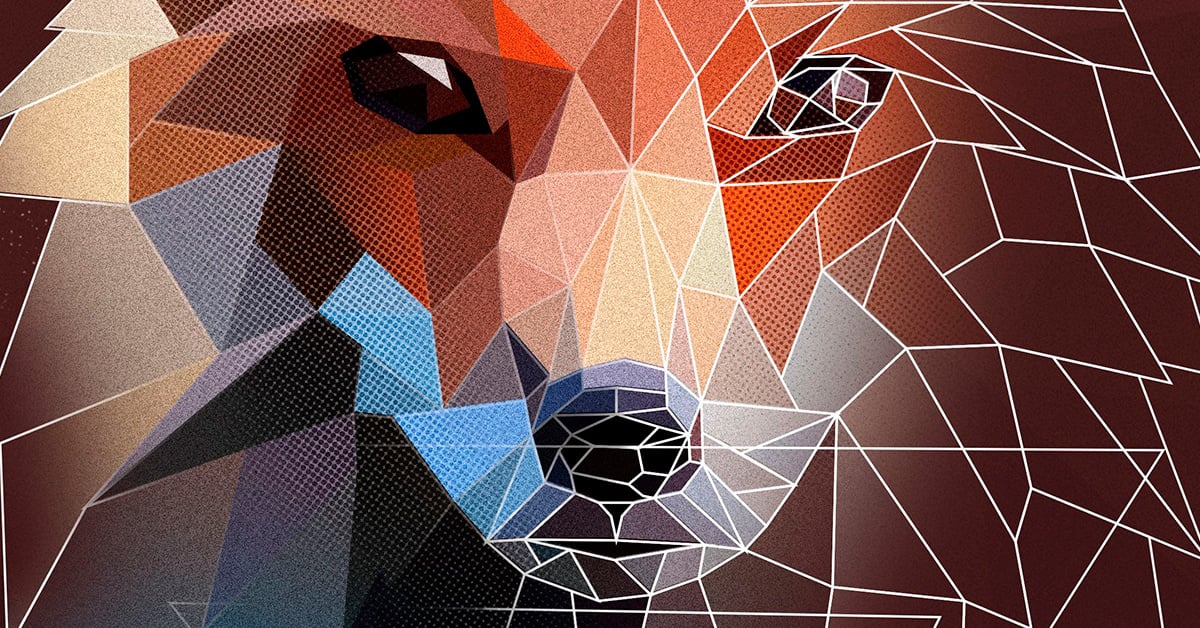 Low poly art, short for low polygon art, is a minimalistic art style used in video game design, animation, and illustration. It favors straightforward colors and geometry over details and life-like realism. Originally a product of hardware limitations, it is now considered a style in and of itself, with its iconic blocky imagery gaining traction among artists and designers of today.

So, how does an outdated graphics technique become one of the hottest fads in the 3D world?

Our short article will answer this question, and hopefully, a few more, including:

Plus, we’ll show you some awesome examples of low poly art to inspire you and get you started on your low poly journey.

Ready for the ride? Come aboard to explore the world of low poly art design!

What Is Low Poly?

In a nutshell, low poly art is a form of digital design that uses a low number of polygons to produce a distinctive angular, often minimalistic, effect.

What are polygons, you ask?

Polygons are 2D geometric figures (usually triangles or squares) arranged in 3D space to form a pattern or shape. Basically, they’re like pixels in a digital picture; the more you have, the greater the detail.

“But Martyna, wouldn’t you want lots of polygons?!”

The answer is, “Generally, yes, but back in the day, this wasn’t an easy feat to accomplish.”

The History of Low Poly Art

Low poly art is a term originating from video games design. Specifically, it dates back to the early days of 3D animation, when fitting the maximum amount of visuals into the lowest number of polygons wasn’t an artistic choice but a necessity. Since the processing capacities of computers and gaming consoles were limited, using a basic visual style that got rid of fine details and textures was essential to assure higher speed and a more enjoyable gaming experience.

And that, kids, is the story of how the now-iconic crude imagery of the original poly design cult games, including Tomb Raider, Resident Evil, and Assassin’s Creed, was born.

While modern-day tech advancements allow game creators to make meticulously detailed and polished graphics, some indie devs have deliberately turned to the low-poly aesthetic, as evident in games like Back in 1995, MacBat 64, Racing Apex, morphê, and Else Heart.

So, why is low poly still relevant, and what does it bring to the table?

The operative word is nostalgia.

To see the blocky textures and spiky edges is to fleetingly warp back through the decades. The same way we had a wave of developers creating games that mimicked the 2D pixel art of their first gaming experiences, we now have devs who grew up during the early days of 3D, wanting to emulate the titles of their childhood.

But pining for the games of yore isn’t the whole story.

Unlike modern high poly graphics, the minimalist low poly art style is geared toward making the player use their imagination. By utilizing a visual style that simplifies aspects of the game, developers encourage players to fill in the gaps themselves.

Readability is another important aspect of low poly. Let’s take Lovely Planet, a low poly shooter game, as an example. It uses both color and silhouette to identify each enemy instantly. All the enemies are red, so they stand out in the scenery. Also, each enemy type has a distinctive shape so that you can react to them appropriately.

A bonus reason to revive the low poly art style? It looks gorgeous in its own right!

Going back to the mid-1990s, low poly emerged as a style of its own around late 2013 when graphic artists began to revise the difference between high poly and low poly. While the low poly style is derived from video games, it’s now being used in all kinds of graphic design, from posters to logos, and even sculptures and tattoo art!

Modern low poly has come a long way from the cobbled-together meshes of the early 3D era. It has evolved to become something rather like modern-day cubism, with artists blending simple geometry with super high resolution and the latest technology in lighting.

How To Create Low Poly Art

I’m sure at one point we’ve all had our brains blown by some awesome low poly art images and wondered how on earth they are made.

So, here are a few useful tips for your very first dabble in low-poly modeling:

Select a copyright-free, high-quality image that gives you a solid structure to work off of. Avoid choosing dull, low-resolution photos.

The easiest and most obvious shapes to use are triangles, but you can experiment with other shapes as well.

If you are a beginner, you’ll save yourself a lot of time if you choose a symmetrical photo. Then you’ll only have to apply the effect on one side and just flip it around to the other side.

Nowadays, low poly is not exclusive to 3D. In fact, most low poly art uses 2D design, so take your pick and get started with your project.

Take a look at how people are using this trend, and put your creative spin on it!

How To Make Low Poly Art in Illustrator

Have you ever wondered how to recreate a low poly effect from an original photograph in Photoshop or Adobe Illustrator? While neither has a dedicated feature that can be used to apply this effect, both will allow you to do so manually.  We would probably recommend Adobe Illustrator out of the two since it’s vector-based (unlike Photoshop, which is pixel-based).

Below are two easy-to-follow tutorials on how to create low polygon art in Photoshop and Adobe Illustrator.

“Less is more” is a cliche saying, but there is beauty in simplicity, which is exactly what poly art is. Unadorned and austere, we’re certain it’s here to stay for the long haul.

If low poly art is your jam, then check our seriously awesome collection of low poly posters!

And if you think there is something we have missed, let us know in the comments!