The Most Powerful Jedi Masters in Star Wars Canon

May 9, 2022 by Martyna Stachowiak in Pop Culture 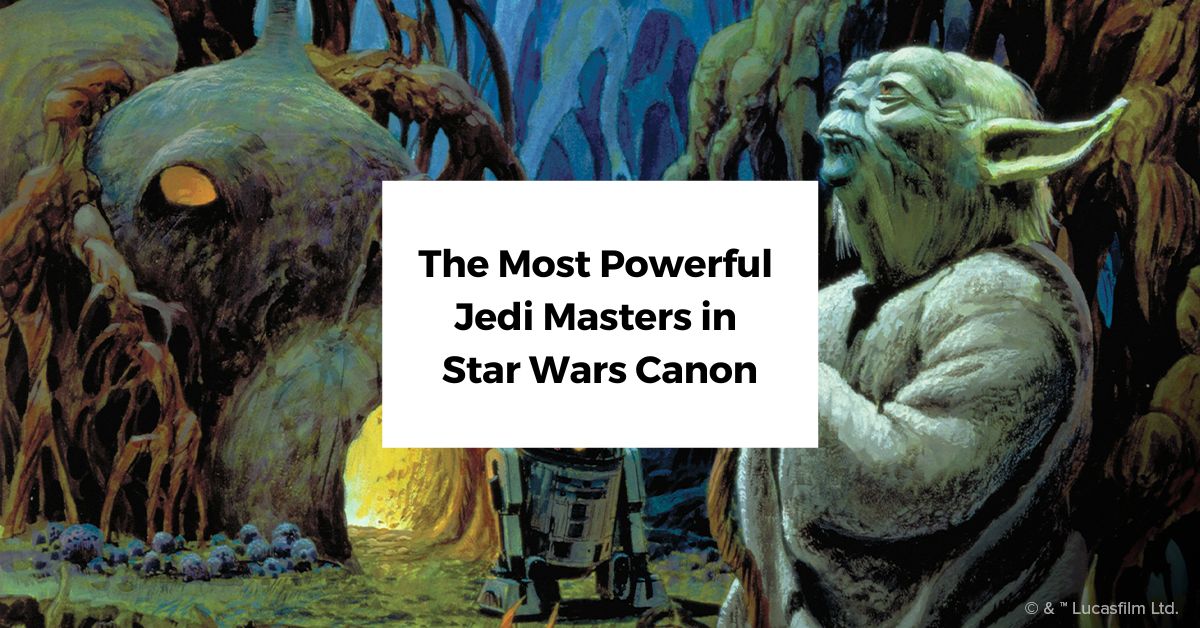 The Jedi are an ancient order of Force-sensitive warriors sworn to defend the Galactic Republic. Over the centuries, hundreds of Jedi Knights and Masters have been capable of some truly remarkable feats, but only a select few became legends throughout the Star Wars galaxy. In this blog post, we look at some of the most powerful Jedi Masters in the Star Wars movie franchise and Star Wars: The Clone Wars, ranking them on their Force powers and influence on the saga.

Before you delve into this list, you may also want to check our article on lightsaber color meanings. *Ffffkrrrrshhzzzwooooom… woom… woooom…* Here we go.

Plo Koon was a member of the Jedi Council in The Phantom Menace and Attack of the Clones and a High General during the Clone Wars. One of the most underrated Jedi in the Star Wars saga, he was an ace pilot, master strategist, and one of the finest lightsaber swordsmen the Order had ever produced. (Suffice to say, he was one of the few Jedi to ever defeat Grand Master Yoda in a duel.) But there was more to him than his outstanding fighting skills. He was a man of wisdom and compassion, revered by fellow Jedi masters for his knowledge, kind heart, and respect for others. And he sensed Force potential in Ahsoka Tano.

Qui-Gon Jinn was somewhat of an outcast in the Jedi Order. While he was a highly regarded Jedi Master, he did not always adhere to the Jedi Code or strictly follow the orders of the Jedi High Council. A pivotal figure in the events of The Phantom Menace, he was the first to realize that Anakin was The Chosen One and that the Sith had returned as well. But most importantly, he was the first Jedi in the canon to rediscover the path to immortality. After physically dying at the hands of Darth Maul, he was able to return as a Force Ghost and then pass this ability to Jedi Grand Master Yoda and Jedi Master Obi-Wan Kenobi.

Ahsoka was discovered by Plo Koon and accepted for Jedi training at the age of three. As a teenager, she was granted the rank of Jedi Padawan and apprenticed to none other than Anakin Skywalker. Alongside her master, she grew from a brash trainee into a skilled warrior highly proficient in lightsaber combat and Force abilities. Her powers were so great that she was able to hold her ground against him in a duel years later, a feat very few Jedi have accomplished. After she was falsely framed for an explosion at the Jedi Temple, she chose to walk away from the Order. However, she never truly left the Jedi path and continued to fight against the Sith and their followers.

Mace Windu is a legendary Jedi warrior widely considered the greatest lightsaber duelist of all time. Creator of Vaapad, a deadly lightsaber combat form that channeled the temptation of the dark side into a force for good, he was the only Jedi to have succeeded at defeating Darth Sidious in a duel. (Though some would say it was a plan by Chancellor Palpatine to fake a defeat and lure Anakin to the dark side.) His outstanding fighting skills and his reputation as a staunch advocate of the Jedi path earned him a place as a leading member of the Jedi High Council and a general in the Grand Army of the Galactic Republic during the Clone Wars.

Rey is the main protagonist of the sequel Star Wars trilogy and one of the most powerful Force users in the history of the franchise. Growing up as an orphan scavenger on the desolate planet Jakku, she was, in reality, the granddaughter of Emperor Palpatine, the Dark Lord of the Sith himself. Rey unlocked her dormant Force abilities when Kylo Ren probed her mind in The Force Awakens and went on to receive some Jedi training from Luke Skywalker. Thanks to her heritage (and her dyad with Kylo Ren), she could access unique powers, including Force lightning, levitation, and psychometry. After defeating her grandfather, she assumed the Skywalker surname to honor the people she truly loved.

Yoda is widely revered as the wisest Jedi and stronger than most in his connection with the Force. During his incredibly long lifespan, he trained generations of Jedis, ultimately serving as the Grand Master of the Jedi Council. A wise sage, during his heyday, he was also a formidable opponent in lightsaber combat. In duels with Count Dooku and Darth Sidious, he held his own, virtually effortlessly absorbing their Force lighting attacks and blasting them back out. By the time Luke Skywalker came seeking a teacher, Yoda’s age had begun to catch up with him, but he was still able to train Luke and help him grow into the Jedi Knight we all know and love.

The legendary Obi-Wan Kenobi is considered one of the strongest Jedi ever to carry a lightsaber. He took down Darth Maul twice, defeated the infamous General Grievous in one-on-one combat, and bested his former apprentice Anakin Skywalker in the fateful duel on Mustafar. Outside of combat, he was a skilled battle tactician and a master negotiator. Perhaps the quintessential Jedi Knight, Obi-Wan never once swayed away from the light side of the Force. After his death, he appeared as a Force Ghost to guide young Luke Skywalker from beyond the grave, ensuring his triumph, Darth Vader’s redemption, and the defeat of the Sith Empire.

Young Anakin was a daring and heroic Jedi Knight prodigiously talented in the Force. With the largest midi-chlorian count on record, he had the potential to become the most powerful Jedi Master who ever lived. However, his fall to the dark side was his undoing. Led astray by Emperor Palpatine, he turned against Obi-Wan Kenobi and lost some of his raw power as a result of their duel on Mustafar. As the notorious Darth Vader, he mercilessly pursued the Jedi and the Rebel Alliance to the ends of the Galaxy. While he eventually turned back to the light side of the Force by sacrificing his life to save his son Luke, he is mostly known as one of the greatest Sith lords in history.

Luke Skywalker is often thought to be the most powerful Jedi of all time. While he possessed all of the talent and raw power that his father Anakin did, he used it for good instead of evil. He destroyed the Death Star, resisted Palpatine’s efforts to corrupt him, and turned Darth Vader away from the dark side, single-handedly resurrecting the Jedi Order and ending the tyranny of the Sith. Unlike old guard Jedi, who forcefully shunned emotion and attachment, Luke embraced caring for those closest to him and the people of the Galaxy. In the end, it wasn’t the steel discipline of a Jedi Knight but his compassion for his father that allowed him to succeed where his masters couldn’t.

These are some of the greatest Jedi Masters whose actions changed the course of galactic history. From their astounding lightsaber skills to their use and knowledge of the Force, they have endeared themselves among fans, becoming a large part of pop culture in the real world.

And speaking of the real world, are your walls in need of some colorful Star Wars art? Shop thousands of collectible Star Wars posters from Displate! Printed on high-quality metal sheets and mounted to the wall with magnets, they look as if they were held in place by the Force itself! Choose from a range of licensed designs, including Clone Wars, Mandalorian, The Book of Boba Fett, and more.

Are there any powerful Jedi masters we didn’t mention? Let us know in the comments below.

The Best Podcasts For True Geeks – vol 1: Laid Back Comics