February 17, 2022 by Martyna Stachowiak in Meet the Collector 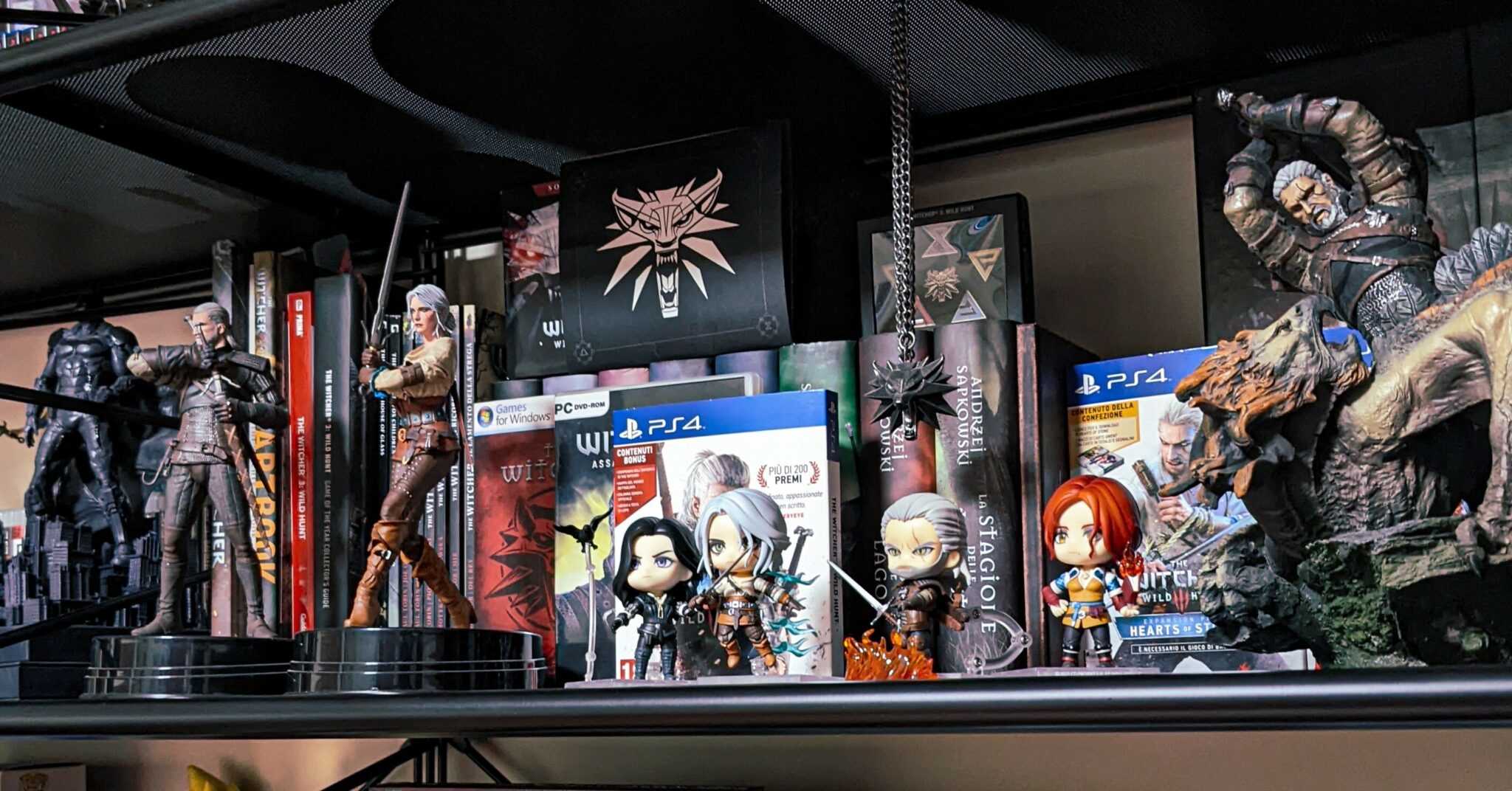 Watch out! The Collector of Blaviken is here to hunt the best Witcher paraphernalia, and nothing and no one will get in his way! Scroll down to find out more about his collecting hobby, how he got in touch with the makers of The Witcher game franchise, and the memorabilia he’s picked up along the way.

I’m a huge video game enthusiast, and this passion was born when my father gave me a Sega Mega Drive for Christmas (I was 4). From there, I started accumulating video games and comics, which I bought with pocket money I earned by doing chores at home. But my true obsession with “thematic” collecting was born in 2013 when the young and ambitious CD Projekt presented the first Witcher 3 gameplay trailer at E3. As a happy PlayStation 3 owner, I was not used to playing on PC, but that trailer bewitched me. I started to read up as much as possible about the saga and the other chapters released only for PC. I bought a powerful PC and played The Witcher 1 and 2 in one go (what an incredible journey!), and then I moved on to the books. In no time, I had already filled a whole shelf with The Witcher stuff, and as you well know, I never stopped. Needless to say, The Witcher has become my favorite saga.

What do you collect?

From The Witcher, I collect everything that comes out, as long as I can afford it. The mega statuettes that cost more than $1000 remain out of the question, but besides those, I search for everything that is on the market. I also have a Witcher bottle stopper, placemats, and a Witcher-themed apron. In addition to The Witcher stuff, I have a nice chubby collection of comics and manga (about 5000 items), many video games, and various figures.

What is that you love most about The Witcher?

Certainly his emotional power, the incredible depth of the characters, and the intense atmosphere. Much of the credit goes to Sapkowski, who was able to create a living and complex world, but the work done by the guys at CD Projekt Red is incredible: riding Roach and galloping across the Velen plains, strolling through the dark alleys of Novigrad, or getting on a boat and setting sail for the Skellige islands are all very unique feelings.

Not to mention the dozens of moral choices encountered in the game, which have made quite an impact on me. But maybe I should avoid spoilers for those lucky people who still haven’t played this masterpiece. The Witcher is just one of a kind and sets very high standards for its genre. How can you not love it?

Who is your favorite character from The Witcher, and why?

My favorite character is definitely Roach. There’s no one more reliable: Roach always takes you to your destination and never complains. If I had to choose between one of the bipedal characters, the fight would be very fierce. I’d put the two protagonists, Ciri and Geralt, at the top of my list, because as characters, they are so powerful and multifaceted that they seem real. They are not heroes or perfect people; they have problems they struggle with, they make morally ambiguous choices and suffer, just like us. Third on the podium is Regis, another magnificent character who unfortunately has little space in the video games. A badass vampire but at the same time a kind soul, truly fantastic. Whichever character you choose, you can’t go wrong because it’s hard to find a bad character in The Witcher.

Which item in your collection is most special to you and why?

I consider all my collectibles special, but the most beautiful and important memory is related to two items: a greeting card and a poster signed by the CDPR team.

After I finished The Witcher 3, I felt morally obliged to find as many dev team members as possible and congratulate them on their monumental work. I was like Liam Neeson in Taken. In the blink of an eye, I found myself talking to the CEO of CD Projekt about a business opportunity. Don’t ask me how, but here I was, out of nowhere, really speaking with one of the bosses of a multi-billion dollar software house XD. During one of our brief chats, I showed him a photo of my collection and asked if there was any chance I could expand it with something that was not for sale. He put me in touch with Radek, Senior PR Manager at CDPR at the time. After exchanging emails, a package from CDPR arrived at my house, containing a collector’s edition version of The Witcher post stamp, a pin, and a postcard wishing me happy holidays, signed by Radek. It may seem like a trifle, but it made me feel very special. Obviously, it did not end there. I was happy but not fully satisfied. That’s why I asked another question: “How big are the chances of me getting a signed poster?” And the answer was: “As soon as you come down here to Warsaw, let’s go get a beer, and I will see if we can arrange something.” It took me 2 hours – 2 HOURS – to organize the trip, and three weeks later, I was already in Warsaw XD.

My most precious memory is that of a coffee (well yeah, for various reasons, we couldn’t have a beer) I shared with Radek at Hala Gwardii, a place where restaurants and food points offer a great selection of cuisine from all over the world. We stayed there for almost 2 hours talking about everything, from video games to football, to the global economy. This splendid afternoon got even better when the poster signed by over 40 development team members was delivered. But the thing that surprised me the most was that after a hard day of work, Radek still found the time to satisfy the request of a simple fan. The guys at CDPR are really special!

Do you have any weird/super rare items in your collection?

My own drawing of Geralt is a strange object in my collection. Well, it is not strange by itself, but it’s pretty weird to consider it an integral part of the collection like I do. Since I was two or three years old, I have always loved drawing instead of playing with toys. A pencil and some colors were enough to keep me busy the whole day (luckily for my parents, I didn’t draw on the house’s walls). So it was evident that one day I would dedicate at least one of my drawings to Geralt, and I think the result is quite good.

As for the rarest piece (aside from the poster, which is unique), I would say the limited edition figurine of Ciri and the Kitsune, a reinterpretation of the character in a feudal Japanese style. Even this figurine has an incredible story behind it: I managed to find it after it had been sold out on the official CD Projekt store, thanks to my hero without a cape called Aleks, another splendid guy from CDPR. In addition to its intrinsic rarity (1200 units worldwide), mine is part of a batch of only 40 figurines created before the official release. This figurine looks best alongside the other magnificent statue of Geralt Ronin.

For me, being a collector is all about associating memories with each object. There’s nothing better than simply walking past my collection and getting lost in all the memories and emotions attached to particular objects or what led me to buy them. I like to think that they are real objects with souls, like the tsukumogami from Japanese folklore. Another aspect that I love is sharing: my collection allowed me to meet hundreds of beautiful people from different cultures who share the same love for The Witcher. This has helped me grow as a person. Thanks, The Witcher <3

This is a sore point. Let’s say that for the most part, my policy has always been “put the new item in a free space,” and obviously, space is always in short supply. A few years ago, I bought a very cool black shelving unit for my room, thinking it’s big enough to serve me for a long time. But when I started collecting The Witcher, the shelves began to fill up one by one. I would love to display the stuff in a more orderly fashion, mainly because the shelves are now really packed, and you can’t see many of the precious pieces. For example, somewhere among all that stuff is a first-edition copy of The Witcher signed by Sapkowski himself – I even shook his hand! Honestly, I find it hard to think about where I will put the next arrivals, including the magnificent figure of Yennefer the Kunoichi, The Witcher manga, and the Big Box version of the board game. I’m screwed.

First of all, the materials: metal gives a big personality to these posters. Then the print quality – it’s absurd! The tactile details, the quality of the colors, the sharpness of the image … WOW! Plus, it’s so easy to hang a Displate: whoever thought of this solution is truly a genius. I have not hung many posters just because it always required taking measurements, finding the right nails and hooks, and then making a hole in the wall. You never know what can happen. I hung my Displate in about 2 minutes, without any effort. Magical!

I sincerely thank you for giving me this opportunity. You are great. For anyone who wants to chat about The Witcher, feel free to drop me a line on my Instagram account @the_collector_of_blaviken. Cheers!

All photos used in this post are © Alessandro De Gaetano, used with permission.